Earlier this week, 5 design proposals were unveiled for Jack Layton Ferry Terminal & Harbour Square Park along Toronto’s waterfront. They are part of an international design competition being organized by Waterfront Toronto – the arm’s length agency in charge of revitalizing this city’s waterfront. 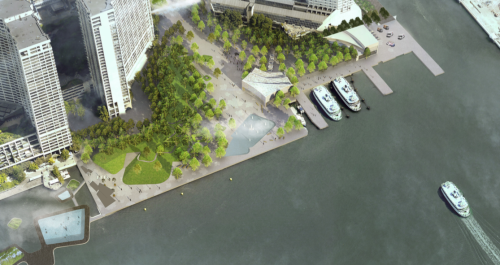 I really like how they integrated water features, pools, and hot tubs into the park and lake. Their proposal made me realize how great it would be to have these functions along the water. It has been done in many other cities around the world. And I think a hot tub could be a big draw during the winter.

The second proposal was submitted by Clement Blanchet Architecture, RVTR and Batlle i Roig. 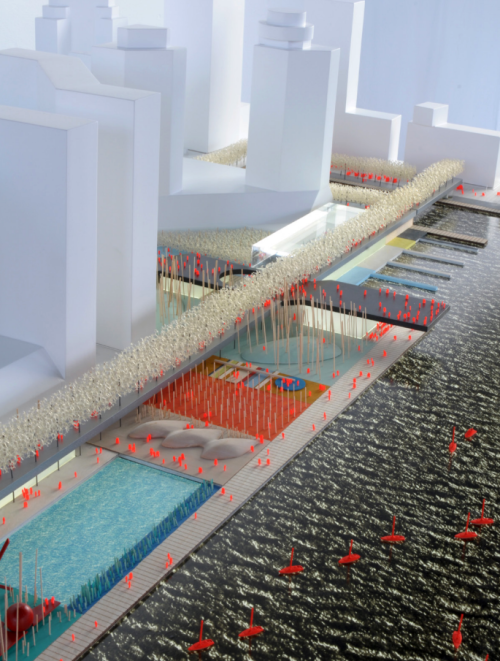 The big ideas here are a grand staircase (”social carpet”) that runs in line with Bay Street and an elevated east-west platform that runs from York Street in the west all the way across the Yonge Street slip in the east.

When I first saw this proposal I thought it was by Rem Koolhaas (OMA) and I doubt I’m the only one with that feeling. That’s not a criticism though. I like the work of OMA. But I think that many Torontonians have an intrinsic aversion to things that are elevated near our waterfront. (We’re currently pontificating about whether we should tear down a portion of our elevated urban highway.)

That said, I think the connection over the Yonge Street slip is an important one. The larger opportunity with this project is to use it as a mechanism to better stitch together our waterfront. I hope we take advantage of that. 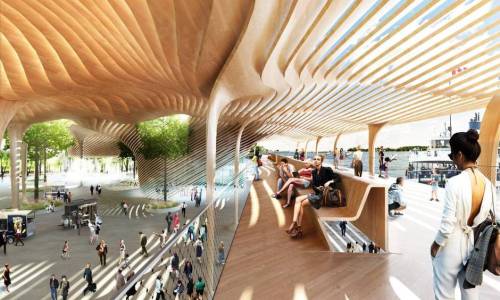 This proposal immediately caught my eye. It’s one of the more sculptural designs and it reminds me of something you might find in Barcelona or Madrid. It also includes a beach (#10 on the site plan shown below). 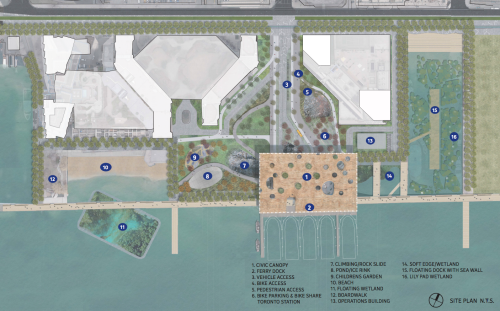 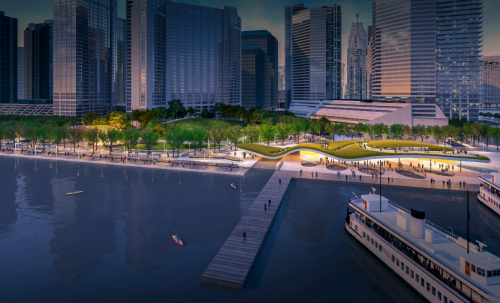 It consists of an undulating green roof terminal building and a more natural surrounding at the foot of Bay Street.

Finally, the fifth proposal was submitted by Quadrangle Architects, aLL Design (Will Alsop), and Janet Rosenberg & Studio.

This proposal consists of a hot pink terminal building running east-west along the water (shown above) and many other features that will strike you as being quintessentially Will Alsop.

My favorite part of this proposal though is the patterning of the surrounding urban park and the pool located towards the bottom left of the site plan shown below. Can you tell that I would really like to see usable water features along the lake? 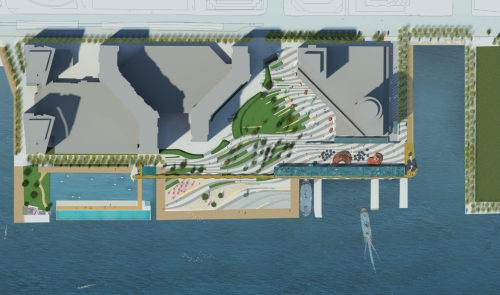 When I first set out to write this post I was determined to pick one design to recommend. And if I were asked to do that I would pick Civic Canopy by Diller Scofidio+Renfro, architectsAlliance, and Hood Design.

However, as I was going through the designs, I instead found myself taking from all of the proposals and mentally accumulating a list of things that I would love to see happen on this site.

Do you have a favorite proposal? What are the most important design elements in your opinion?