I am a real estate developer and I believe in progress. But I also fundamentally believe in balancing progress and preservation. I’ve said this before.

This morning, Alex Bozikovic of the Globe and Mail, published a piece on the epic Mirvish + Gehry proposal for Toronto’s Entertainment District. It’s called, “Frank Gehry and David Mirvish’s tall order in Toronto.”

Now, I’ve said before that I like this project. I don’t mind the height and I don’t buy the argument that there aren’t enough public spaces in the area. There’s David Pecaut Square directly to the south that could use a few more warm bodies in it.

But as I also said before, I think the key concern here is one of heritage. There are 4 heritage designated buildings on the site dating back to as early as 1901. Here’s where they sit: 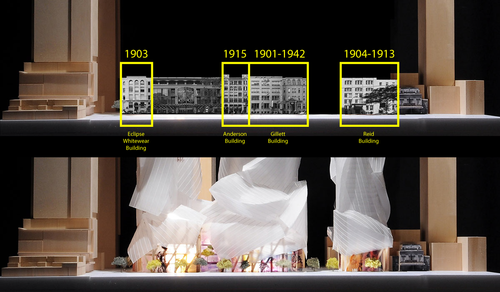 The Anderson Building (1915) is particularly unique. Here’s a larger photo (via blogTO): 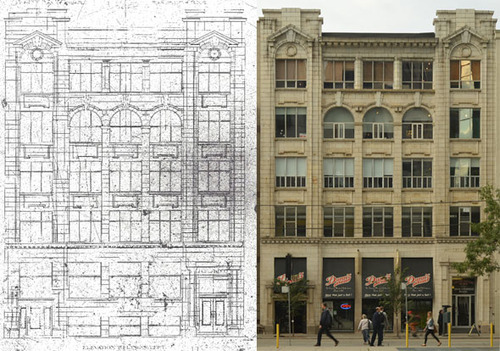 So while I’m excited by the prospect of a real Gehry project in Toronto, I think we need to figure out a way to find a balance. Preserve the facades, build on top, or relocate them. Do something besides wipe the slate clean.

As Bozikovic rightly points out in his article, “Toronto has a sophisticated culture of working with heritage buildings.” There are lots of great examples of how we managed to move forward as a city, without erasing our past.

And in many ways, I see this ability to work with and build upon heritage buildings as an emerging Toronto vernacular. I mean, what could be more appropriate for the most diverse city on the planet than an architectural style–of our own–that blends and layers history with disparate design ideologies.

I sense an opportunity.

We could have Gehry’s white sinuous curves drape over the heritage buildings. Make them become a literal unveiling of Toronto’s past and a metaphor for the sophisticated way in which we build upon legacy.

It’s too easy to just demolish everything. We’re better than that.